The SMSZ Project is both named after and overlies a 38 km section of the Senegal Mali Shear Zone (see Figures 1. and 2.), which is related to 5 large mines located to the north and south, along strike, including B2 Gold’s Fekola Mine, Barrick’s Gounkoto and Loulo Mines and AngloGold Ashanti/Iamgold’s Sadiola and Yatela Mines[1]. To the Company’s knowledge, its SMSZ Project is the largest, contiguous, non-producer land package over this very prospective structural feature.

Desert Gold’s CEO Jared Scharf commented “I am very pleased our team was able to complete the planned drill program and a bit more, before the annual rainy season set in and made exploration impractical. All samples have been delivered to the laboratory. We are looking forward to the results, which we believe will continue to demonstrate the value of this large sized, well situated, exploration property.”

Desert Gold’s planned SMSZ exploration program was successfully completed on Jul 29. In total, 4 core holes, 13 RC holes and 34 AC holes were completed for a total of 3,759.5 metres. As well, 1,065 auger holes were drilled for 9,557 metres. Assay results are expected in August.

In detail, 3 core holes totalling 676.5 metres and 12 RC holes totalling 1136 metres were drilled over the Gourbassi East and West Zones. Core and RC holes were designed to target extensions to know mineralization, including follow-up of an at-surface intercept of 3.52 g/t gold over 33 metres (estimated 28 metres true thickness) and to validate an updated interpretation of the mineralized zones. For the most part, sericite- and silica-altered and pyrite-mineralized zones were intersected where expected. This type of sulphide mineralization has returned gold values in previous holes, however, there is no guarantee that gold mineralization will be returned from these holes. 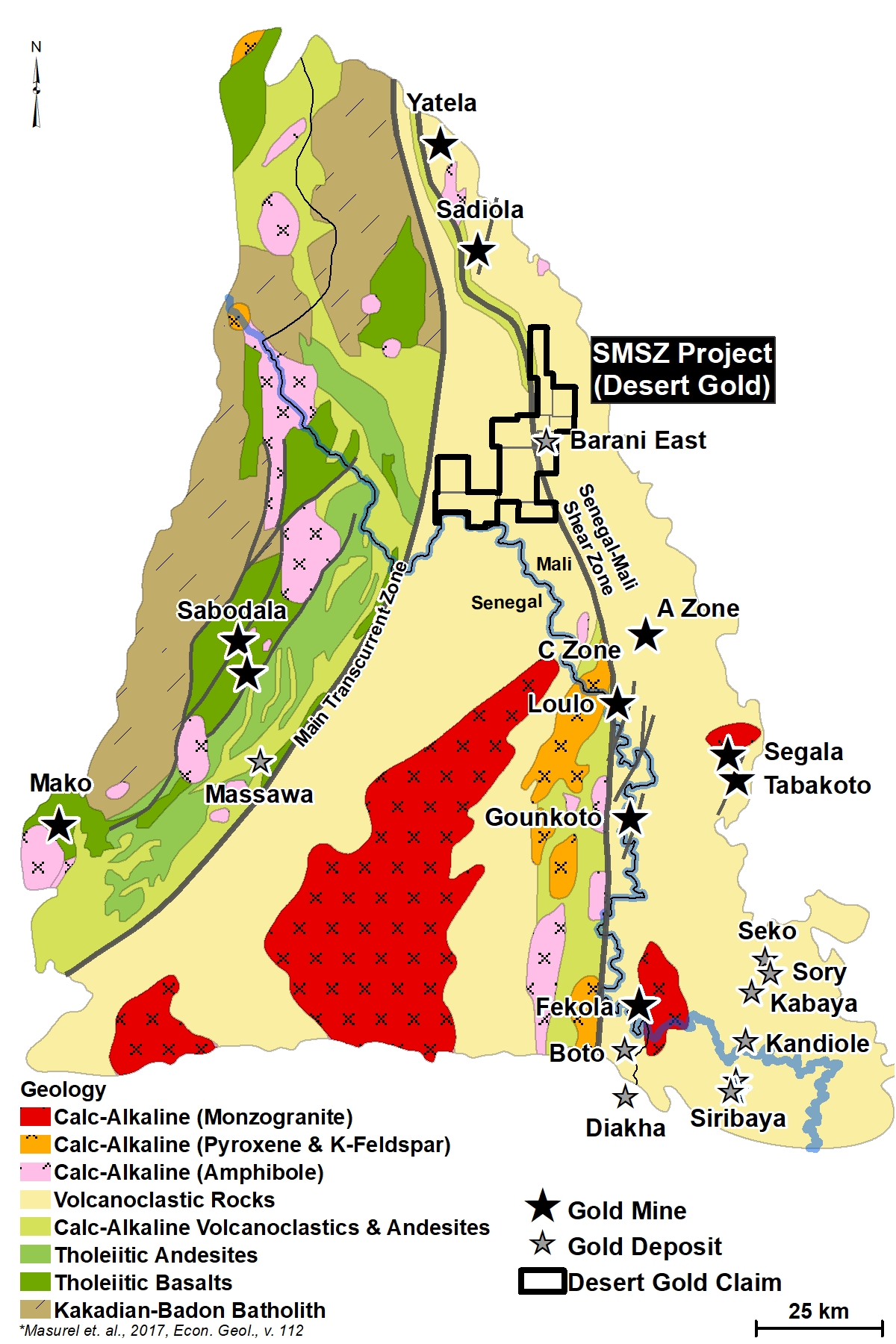 The Gourbassi West Zone consists of four, interpreted, north-trending lenses of gold mineralization that have been traced for approximately 1,000 metres along strike and to 140 metres depth. Drill holes have returned intercepts to 3.52 g/t gold over 33 metres (approximately 28 metres true width). Thicker mineralized zones appear to plunge shallowly to the north. The mineralized lenses are hosted by intermediate volcanic rocks, silicified hydrothermal breccias and sediments, located immediately to the east of a major, north-northeast trending, likely structural, geological contact. Hydrothermal breccias are common in the Gourbassi area and are often gold bearing. The hydrothermal breccias continue for at least 1,100 metres to the north of the Gourbassi West Zone, where weak to moderate strength, gold-in-soil anomalies to 170 ppb gold, have been noted. Induced polarization (IP) resistivity high anomalies correlate quite well with the mineralized zones, which are generally silicified, sericitic and pyritic. Several, nearby, untested IP resistivity highs will be evaluated as exploration targets.

The Gourbassi East Zone consists of at least seven, north-northeast trending lenses of gold mineralization up to 37 metres wide, that have been traced for approximately 800 metres along strike to 170 metres depth. The deepest hole returned 7.49 g/t gold over 11 metres (true width approximately 6 metres). This zone is dominantly hosted by pyritic, quartz-veined, sericitic, high titanium, intermediate composition volcanic rocks. Felsic volcanics have been noted in the area, but, their relationship with the mineralized zones is uncertain. Magnetic and mapping data indicates that the thickest part of the gold zone lies near a northerly-trending shear zone contact with a northwesterly-trending magnetite iron formation.

The Barani East zone is a northeast-trending, sulphide replacement zone in silicified limestones. This type of alteration and host rock, are similar to the large Sadiola Gold Mine, located along the same structural and geological trend, approximately 50 km to the north. Multiple, moderate-southwest-plunging lenses of gold mineralization have been both identified and inferred in the Barani East area. A single core hole is planned at the Barani East Zone to test approximately 70 metres down-plunge of 6.3 g/t gold over 13 metres (approximately 11 metres true thickness). If this hole intersects additional strong gold grades, two additional holes have been proposed as follow-up. The goal with Barani East, is to continue to expand the mineralization footprint with an objective to increase the current modest indicated resource of 46,600 ozs gold grading 2.22 g/t gold and an inferred resource of 23,300 ounces grading 2.29 g/t gold (2016, 43-101 compliant report -  Technical Report on the Farabantourou Gold Mining Permit, Kéniéba District, Western Mali, Mineral Resource Update). Drilling, completed subsequent to the resource estimate, has extended the gold mineralized zones beyond the current in-pit estimated resource.

A total of 32 Air Core holes were drilled in the recent program.

Seventeen of the holes were completed in the “Barani Gap” as follow-up of a previous AC program that returned intercepts of 3.03 g/t Au over 10 metres* and 3.5 g/t Au over 8 metres*. Both intercepts were returned from sulphide-altered limestone, similar to the Barani East Zone, which is located 1,000 metres to the north.

The objective of the auger drilling, is to test for gold mineralization below, what is generally, a barren cap of surficial, iron enrichment, that often occurs in West Africa. An advantage of laterite cover, is that, often, this area has not been the subject of previous exploration programs and, if related to iron-bearing alteration in the rocks below, results in a good quality exploration target area.

A total of 21, generally, wide-spaced, auger drill fences comprising 1,065 holes were completed with an average depth of approximately 9 metres. All holes were vertical with holes on individual fences spaced 25 metres apart. Auger drill fences were completed over the laterite-covered, projected strike of the Senegal Mali Shear Zone (5 fences), across the northeast-trending structural corridor that hosts the Barani East and Soa Zones (12 fences), along the northerly strike extent of the Berola Zone hydrothermal breccias (3 fences) and across a distinct structural feature in the southeast corner of the property (1 fence). Most of the holes, and, the longest drill fence at approximately 4.4 kilometres long, were drilled across the wide, laterite-covered area adjacent to the east side of the Senegal Mali Shear Zone, in the central portion of the property. 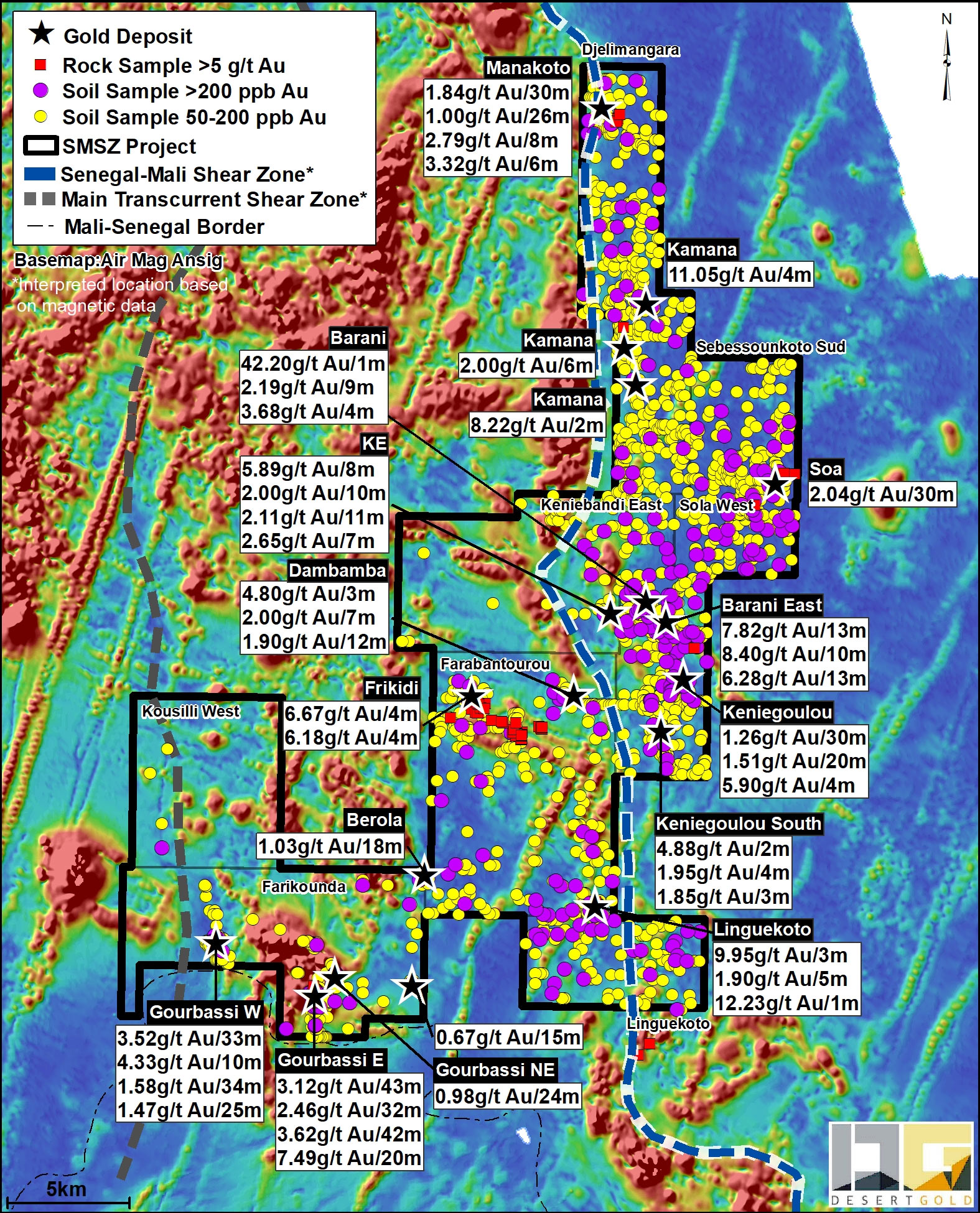 All AC, and RC samples were geologically logged following Desert Gold’s established standard operating procedures. For AC and RC drilling, all individual samples represent approximately one-meter in length of rock chips homogenized and riffle-split to an approximately 2 kg sub-samples which were sent by truck from the project site, for preparation and gold assaying at the SGS laboratories in Bamako, Mali.

Each sample (AC, and RC) is fire-assayed for gold by SGS laboratories in Bamako using Au-FAA505 method, which is a 50g fire assay fusion with AAS instrument finish. In addition to SGS’s own QA/QC (Quality Assurance/Quality Control) program, Desert Gold’s internal quality control and quality assurance procedures included the use of certified standards (1 :20), sample duplicates (1 :20) and blanks (1 :20). Sample batches that fail QAQC review, especially those with significant gold intercepts, are re-assayed with the insertion of new standards.

Certified Reference Materials and Blanks were inserted into the sample stream at the rate of 1:20 samples.  Field duplicates are collected at the rate of 1:50 samples.  All samples have been analyzed by SGS Laboratories in Bamako with standard preparation methods and 50g fire assay with atomic absorption finish.  SGS adds their own QA/QC samples into the sample stream and had reported them to Ashanti for double checking.  Higher grade samples were reanalyzed from pulp or reject material or both.

Contact:
Jared Scharf, President & CEO
Email: This email address is being protected from spambots. You need JavaScript enabled to view it.