The ~410 km2 SMSZ Project is both named after, and, overlies a 38 km section of the Senegal Mali Shear Zone (see Figure 1), which is related to 5 large gold mines located both to the north and south, along strike, including B2 Gold’s Fekola Mine, Barrick’s Gounkoto and Loulo Mines and AngloGold Ashanti/Iamgold’s (now Allied Gold’s) Sadiola and Yatela Mines[1]. To the Company’s knowledge, the SMSZ Project is the largest, contiguous, non-producer land package over this very prospective structural feature. Exploration targets within 5 km of the Senegal Mali Shear Zone, are considered by management, to be high priority exploration targets.

Desert Gold carried out a 51-hole drill program during June and July, 2020. Model driven targets were tested at the Gourbassi East, Gourbassi West and Barani East Zones (see Figure 2). This news release includes results from 14 RC and core holes completed over these three zones. Results for the 34 AC totalling 1,621 metres and 1,065 auger holes are still pending.

A summary of the drill highlights* are as follows (see Figures 3-6 for more detail and Table 1, at end):

* Estimated true widths for the holes is from 65 to 90% of the intercept width.

Jared Scharf, Desert Gold’s CEO comments “During two drill campaigns in the recent drill season, we completed approximately 40% of approximately 20,000 metres of proposed drilling. This work has resulted in the discovery of at least five new areas of gold mineralization, validation of the updated mineralization models at the Gourbassi and Barani East Zones and further increased the scope of the SMSZ Project. With this exploration base, the Company is prepared to execute the largest exploration program it has ever undertaken, over which, management believes, is some of the most prospective ground in West Africa.” 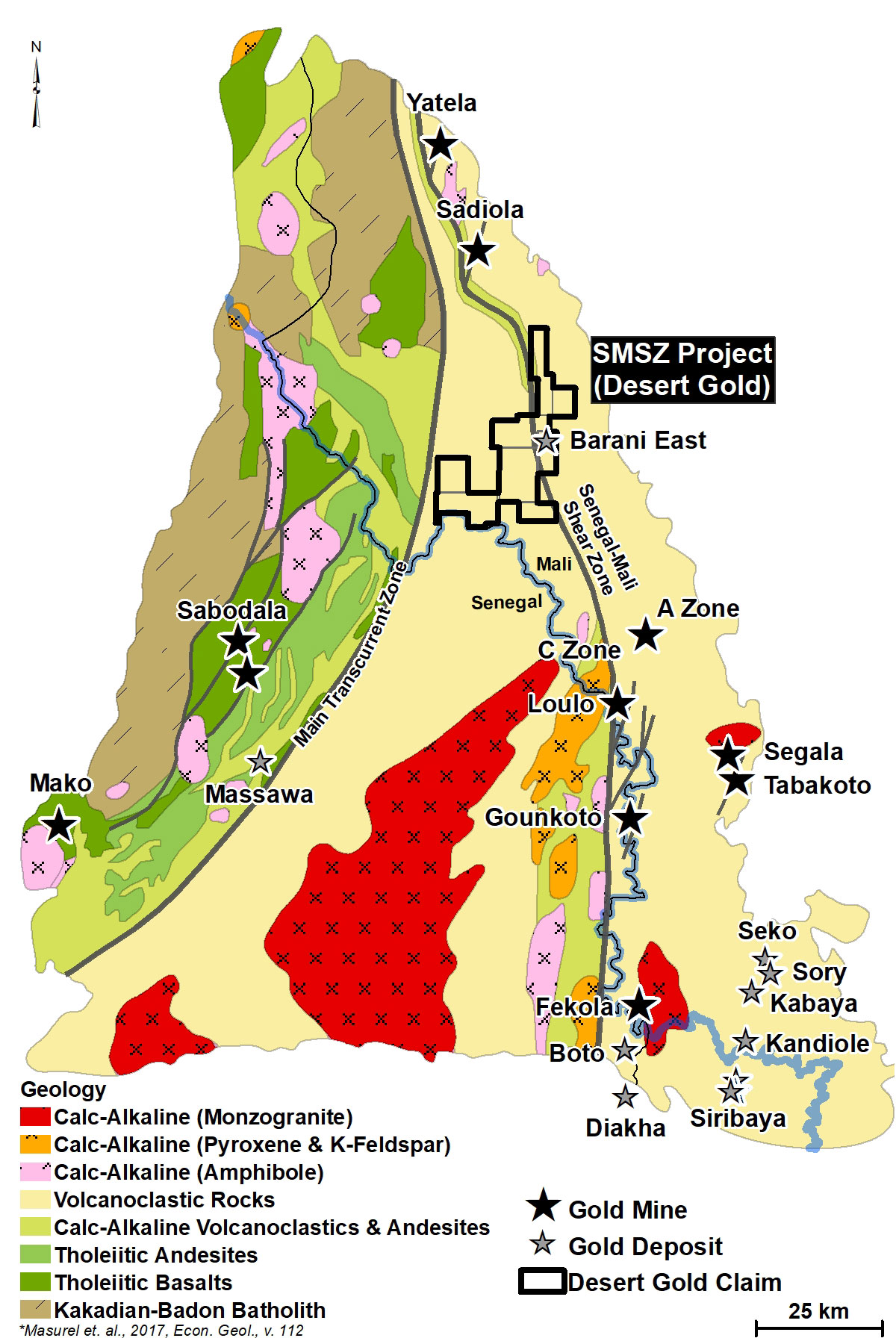 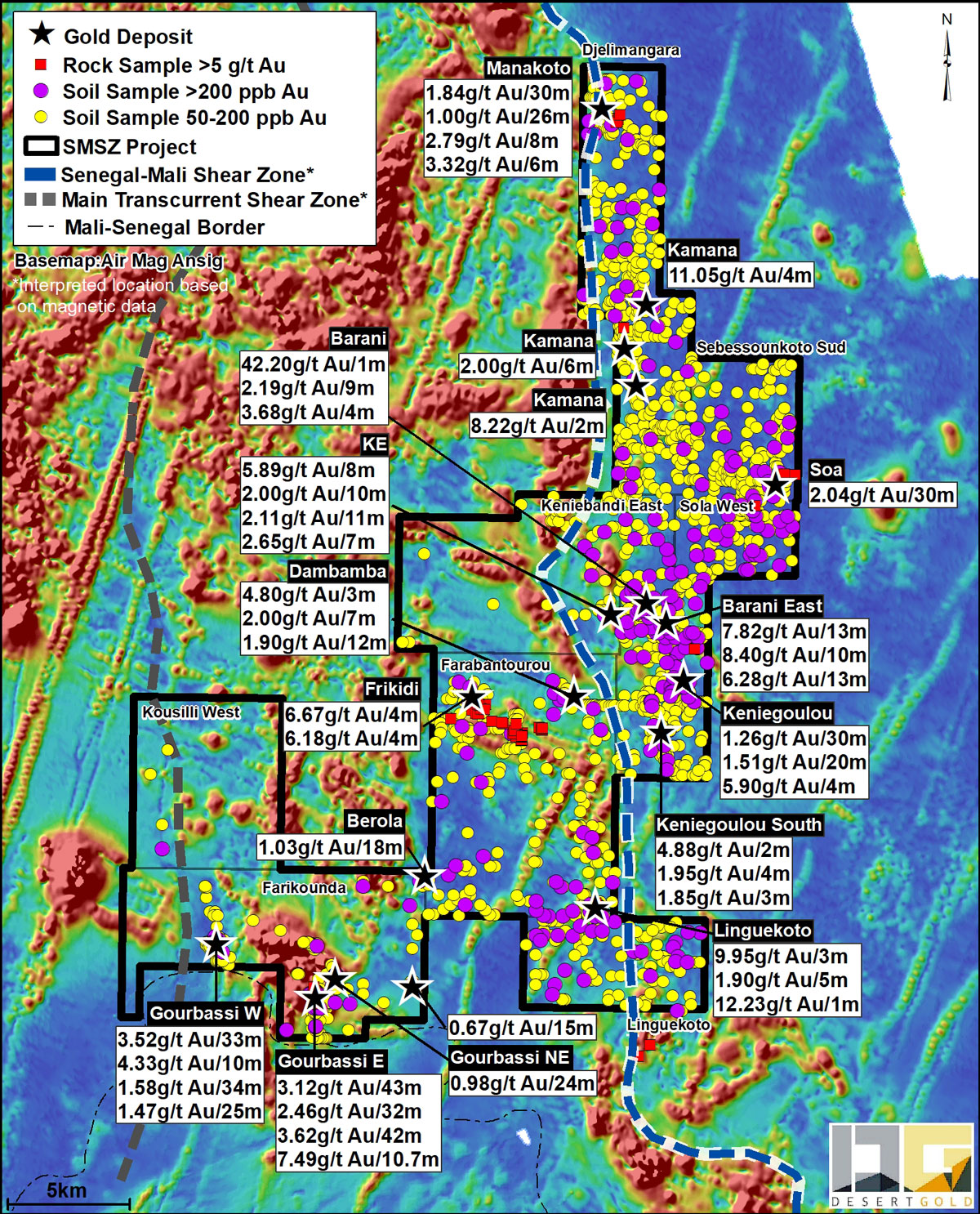 The phase 2 drill program was carried out to test model-driven targets at Gourbassi West, Gourbassi East and Barani East zones. Significant amounts of gold mineralization were intersected at all three zones, which will require additional follow-up drilling.

Five RC and 2 core holes were drilled to test an updated mineralization model at Gourbassi East (Figure 3). Four of the holes intersected significant amounts of gold mineralization. With a highlight of 3.09 g/t Au over 25 metres.

The RC drilling was successful in extending two of the mineralized trends to the south. The best results were returned from RC hole, FR-20-RC-002, which was drilled to the east to test for the southward extension of the main mineralized corridor. This hole, which was is a 75 metre south step out, intersected two intercepts of 2.54 g/t gold over 15 metres starting at 75 metres down hole and 3.09 g/t Au over 25 metres starting at 103 metres down hole. Additional drilling is required to the north and south of this intercept to better define this unexpectedly strong zone of gold mineralization. A second hole, on this drill section, FR-20-RC-003, which was drilled to the west to confirm the updated mineralization model, intersected a third, gold-bearing intercept that returned 0.71 g/t gold over 8 metres, where expected, at a vertical depth of approximately 100 metres.

FR-RC-20-001, which tested the north end of the mineralized trend, was drilled 26 metres below an intercept of 1.71g/t Au over 7 metres. One narrow intercept of 0.75 g/t Au over 1 metre was intersected near the top of the hole. A working theory indicates that this hole was drilled below the plunge of the zone.

RC hole, FR-20-RC-004, intersected 1.66 g/t gold over 14 metres starting at 42 metres and a 2nd, deeper intercept of 1.34 g/t Au over 5 metres starting from 154 metres down hole. This west facing hole was drilled to cut across a previous hole that appeared to drill partially down dip and to test a 2nd parallel lens of mineralization with a 75 metre south step out. This hole was deemed a success as it both extends and validates a parallel system of gold mineralization to the west of the initial Gourbassi East Zone discovery.

FR-RC-20-009 was drilled to test the northern strike extension of the western most Gourbassi East gold lenses. It intersected two narrow gold zones, where expected, that returned 0.78 g/t Au and 0.66 g/t Au each over 1 metre. 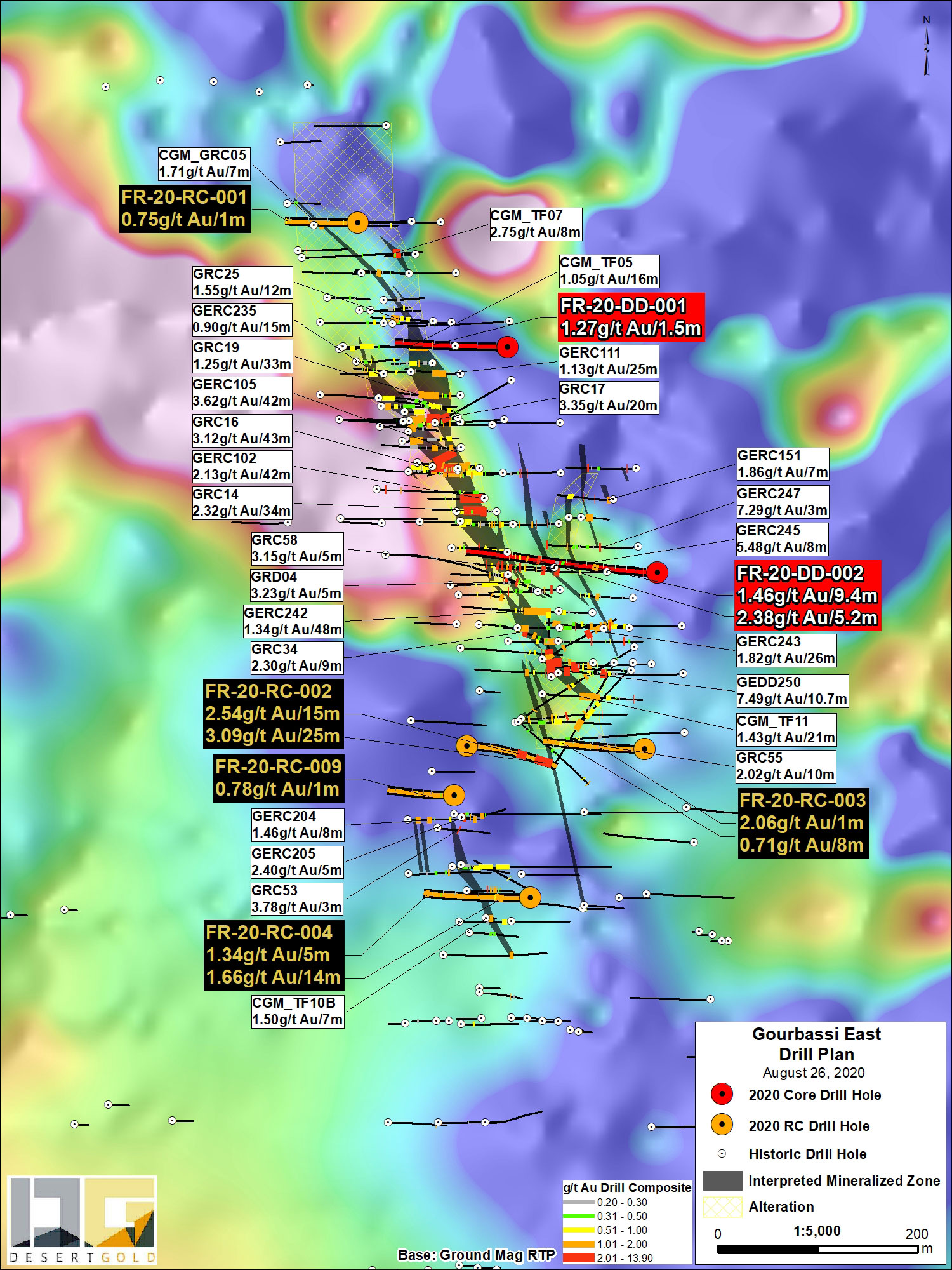 Four RC holes and 1 core hole, were drilled at Gourbassi West during the recent drill program (see Figure 4 – for locations). Three of the five holes intersected significant gold mineralization with a best intercept of 1.02 g/t Au over 15 metres.

Two of the holes FR-20-RC-005 and 006 where drilled to test the strike extension of a drill intercept that returned 3.52 g/t Au over 33 metres in hole GWRC305. Hole 006 intersected four intervals grading better than 0.5 g/t Au with the best interval returning 0.75 g/t Au over 20 metres, at a deeper than expected depth of approximately 70 meters vertical. This interval is assumed to correlate with the strong, at surface intercept in hole GWRC305. Assuming this interpretation is correct, then hole FR-RC-20-005, may have been collared too far to the east and overshot the target and hole FR-RC20-006, may have drilled below the assumed, flat-plunging, best part of the zone. Holes will be planned to test behind FR-RC-20-005 and in front of FR-RC-20-006, to intersect the zone closer to surface, to test these inferences.

Hole FR-20-RC-007 was drilled to confirm the updated geological model and to cut across a previous, assumed down-dip intercept of 1.05 g/t Au over 63 metres. This hole intersected a near surface interval that returned 1.23 g/t Au over 15 metres, where predicted on the contact of a 75-metre wide, granitic intrusion.

Hole FR-20-RC-008 was drilled to test the southern strike extent of a modelled western lens of gold mineralization. This hole intersected two mineralized intervals which returned 1.91 g/t Au over 3 metres from 61 metres and 1.68 g/t Au over 6 metres from 110 metres. These two intercepts correlate with two sets of moderate-west-dipping mineralized lenses located 50 metres to the north. There are no holes to the south. These two lenses trend northeast and appear to be parallel to a geological structure immediately to the west of these zones.

One core hole, FR-20-DD-003 was drilled to test the northern strike extension of the central part of the Gourbassi Zone. This hole intersected a near surface zone that returned 1.23 g/t Au over 5.7 metres, but did not intersected three other modeled lenses. It is suspected that the hole was drilled below the plunge of the zones. 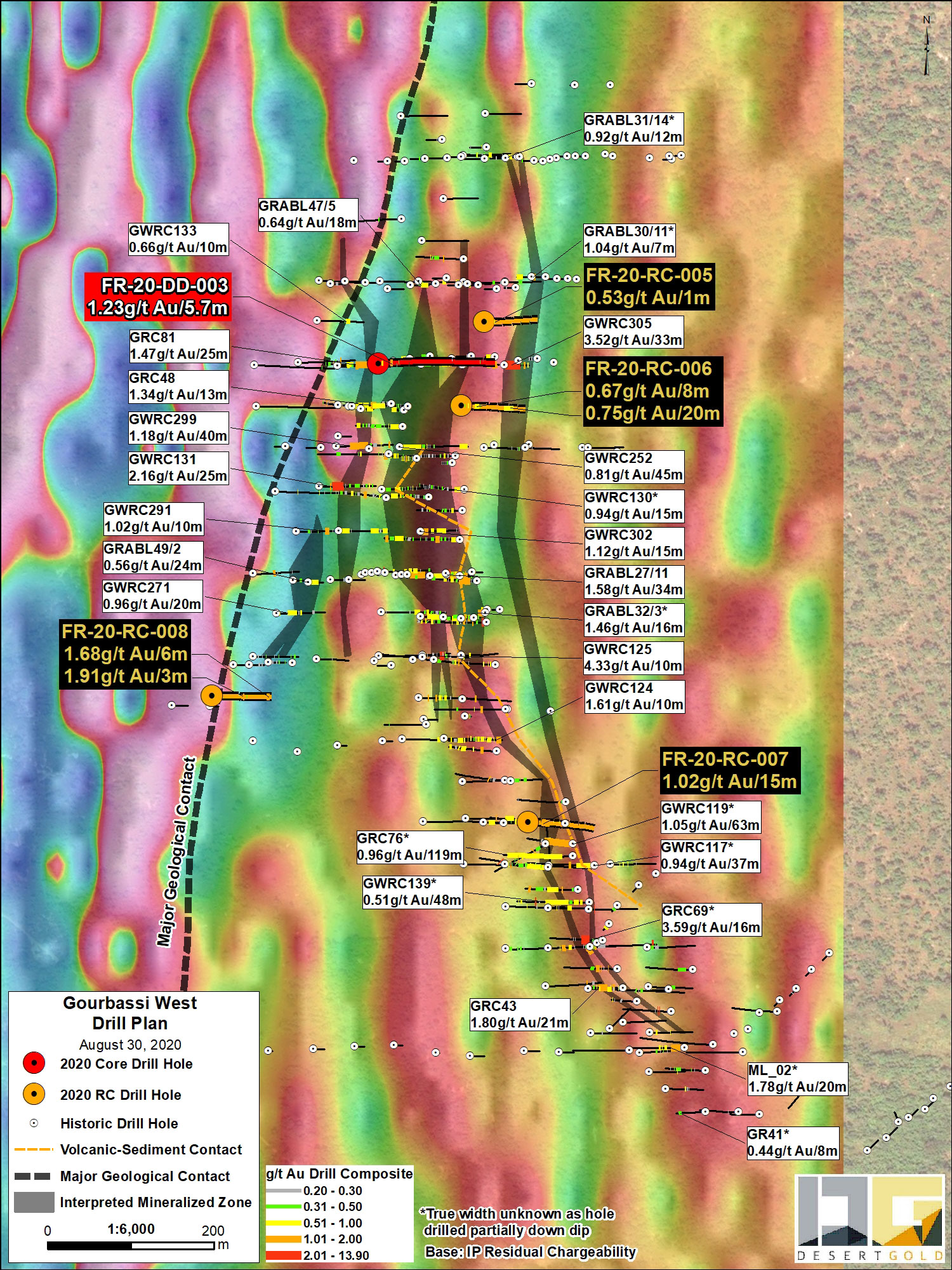 This limestone-hosted gold zone has been traced for approximately 450 metres down a shallow, southwest plunge and is open down plunge. Additional plunging lenses of gold mineralization are being targeted along strike of this central lens. This mineralized system appears to be related to near surface, limestone-hosted, AC hole, gold intercepts of 1.36 g/t Au over 6 metres and 3.03 g/t Au over 10 metres (Figure 5), which could extend the Barani East Zone another 800 metres to the south. More drilling is required both along strike and down-plunge of the Barani East zone.

An RC hole, BERC0015, was drilled to test down plunge of an en-echelon gold-bearing lens. It intersected 0.75 g/t Au over 4 metres (Figure 5 and 6). Based on modelling, this hole just clipped the lower edge of the gold lens. Follow-up drilling is planned. 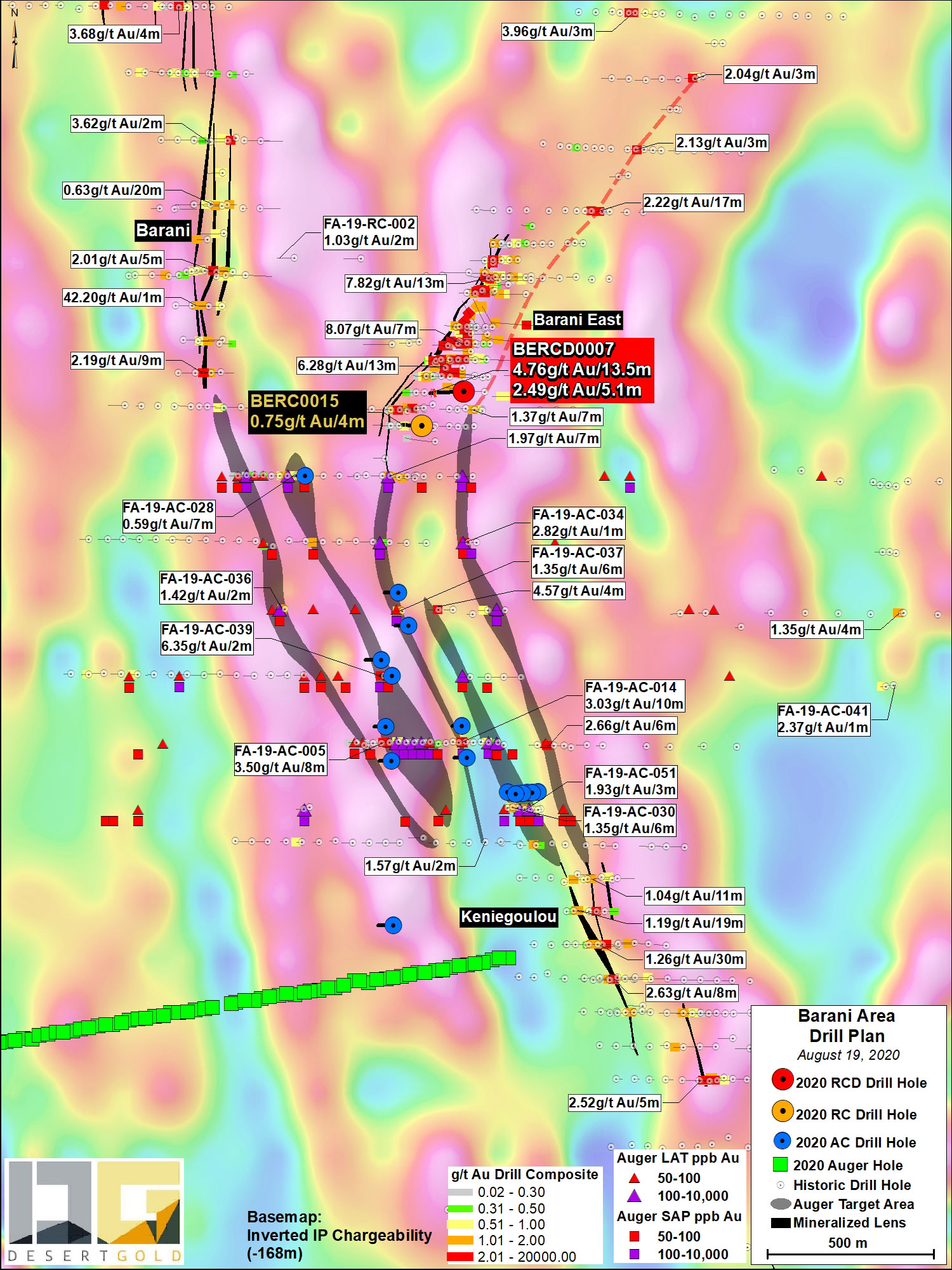 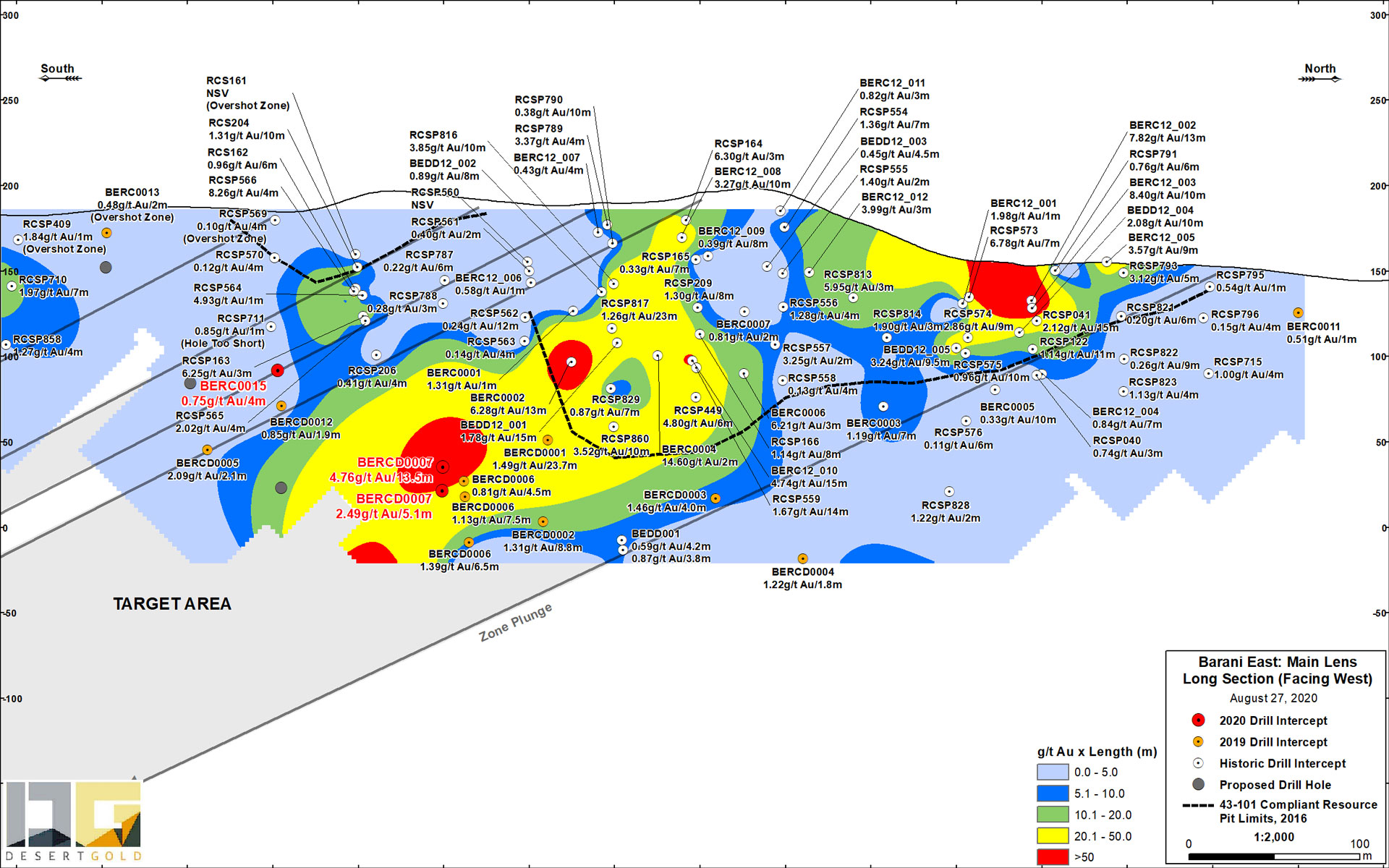 The results for 34 air core (AC) holes are still outstanding, along with the results for 1,065 auger holes. These results are expected within the next month.

Planning for a 43-101 compliant technical report is in progress. Updated modelling of mineralized zones is in progress with an assumed flat plunging bias for most of the gold zones. Assuming no technical issues, this report is scheduled to be completed before the resumption of drilling in November.

A drilling program, comprising at least 15,000 metres of drilling, will commence in November, 2020 and continue, campaign style, through to early July, 2021. The goal of the program will be to test previously planned targets, and, to follow up, in real time, the results of the drilling program. The initial work program will start at the Gourbassi Zones and Barani East Zone, to complete previous planned holes and then continue throughout the project area to test the numerous current targets. As results come in, the drill targets will be re-prioritized.

For AC and RC drilling, all individual samples represent approximately one-meter in length of rock chips homogenized and riffle-split to an approximately 2kg sub-samples which were sent by truck from the project site, for preparation and gold assaying at the SGS laboratories in Bamako, Mali.

Each sample (AC, and RC) is fire-assayed for gold by SGS laboratories in Bamako using Au-FAA505 method, which is a 50g fire assay fusion with AAS instrument finish. In addition to SGS’s own QA/QC (Quality Assurance/Quality Control) program, Desert Gold’s internal quality control and quality assurance procedures included the use of certified standards (1:20-30), sample duplicates (1 :20) and blanks (1 :20). Sample batches that fail QAQC review, especially those with significant gold intercepts, are re-assayed with the insertion of new standards.

Desert Gold Ventures Inc. is a gold exploration and development company that holds 2 gold exploration projects in Western Mali (SMSZ and Djimbala) and its Rutare gold project in central Rwanda. The Company’s current focus is its 391 km2 SMSZ Project that spans approximately 38 km of the prolific Senegal Mali Shear Zone.