The ~410 km2 SMSZ Project is both named after, and, overlies a 38-km section of the Senegal Mali Shear Zone (see Figure 1), which is related to 5 large gold mines located both to the north and south, along strike, including B2 Gold’s Fekola Mine, Barrick’s Gounkoto and Loulo Mines and AngloGold Ashanti/Iamgold’s (now Allied Gold’s) Sadiola and Yatela Mines1. To the Company’s knowledge, the SMSZ Project is the largest, contiguous, non-producer land package over this very prospective structural feature. Exploration targets within 5 km of the Senegal Mali Shear Zone, are considered by management, to be high priority exploration targets.

* Estimated true widths for the holes for the Barani Gap holes is 80% to 90% of the intercept width. The true width of the Sorokoto North, Soa South and Kolon Zones is unknown at this time.

Jared Scharf, Desert Gold’s CEO commented “We’re very encouraged by these results. Our air core results have both continued to expand the scope of recently discovered gold mineralization at the Barani Gap and resulted in the discovery of new gold zones at Sorokoto North, Kolon and Soa South. As well, the new auger results further emphasize that, in our opinion, we will find more gold zones.” Mr. Scharf also noted that “with a recently topped up treasury, we have the funds to further advance and test these targets as they are being developed.” 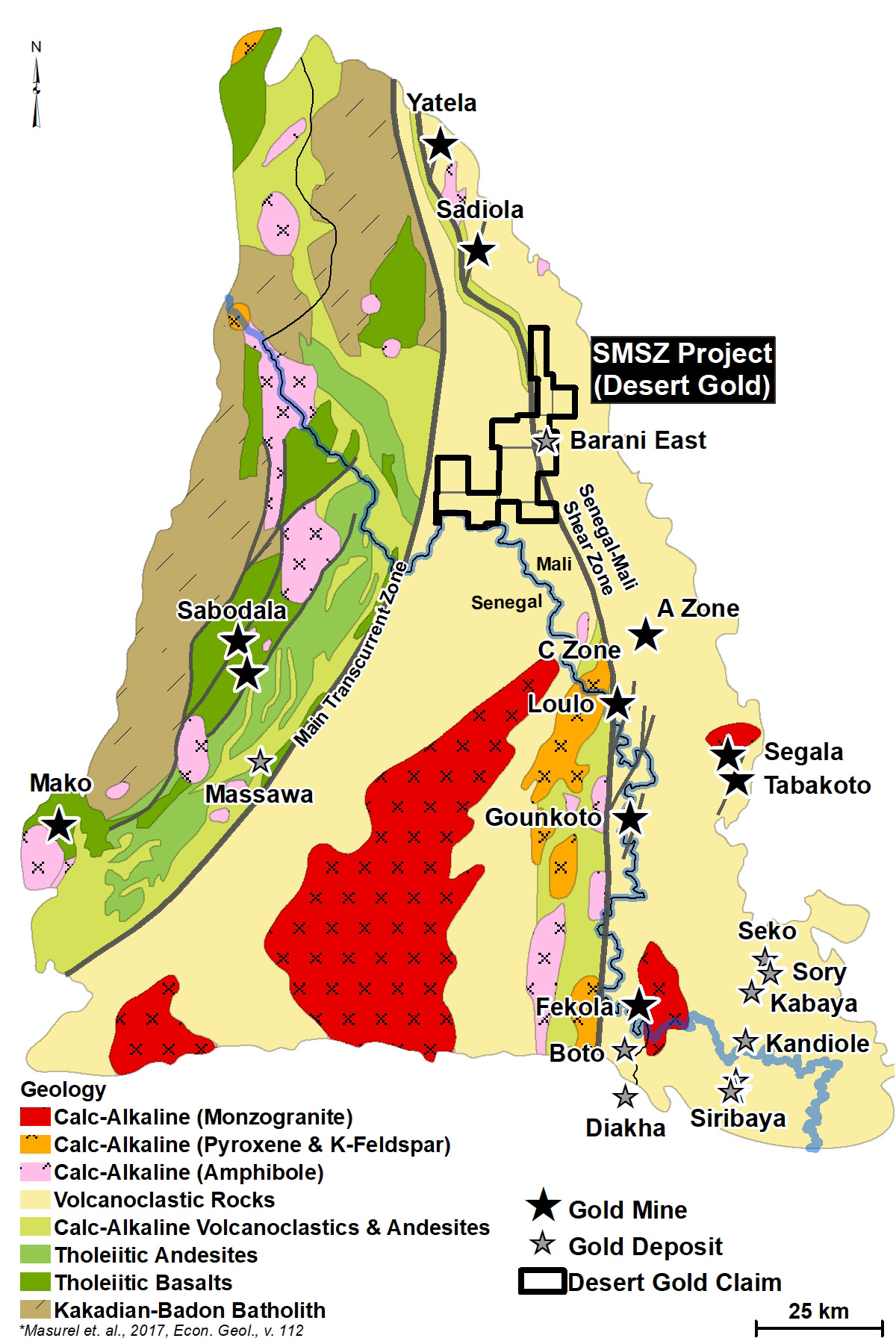 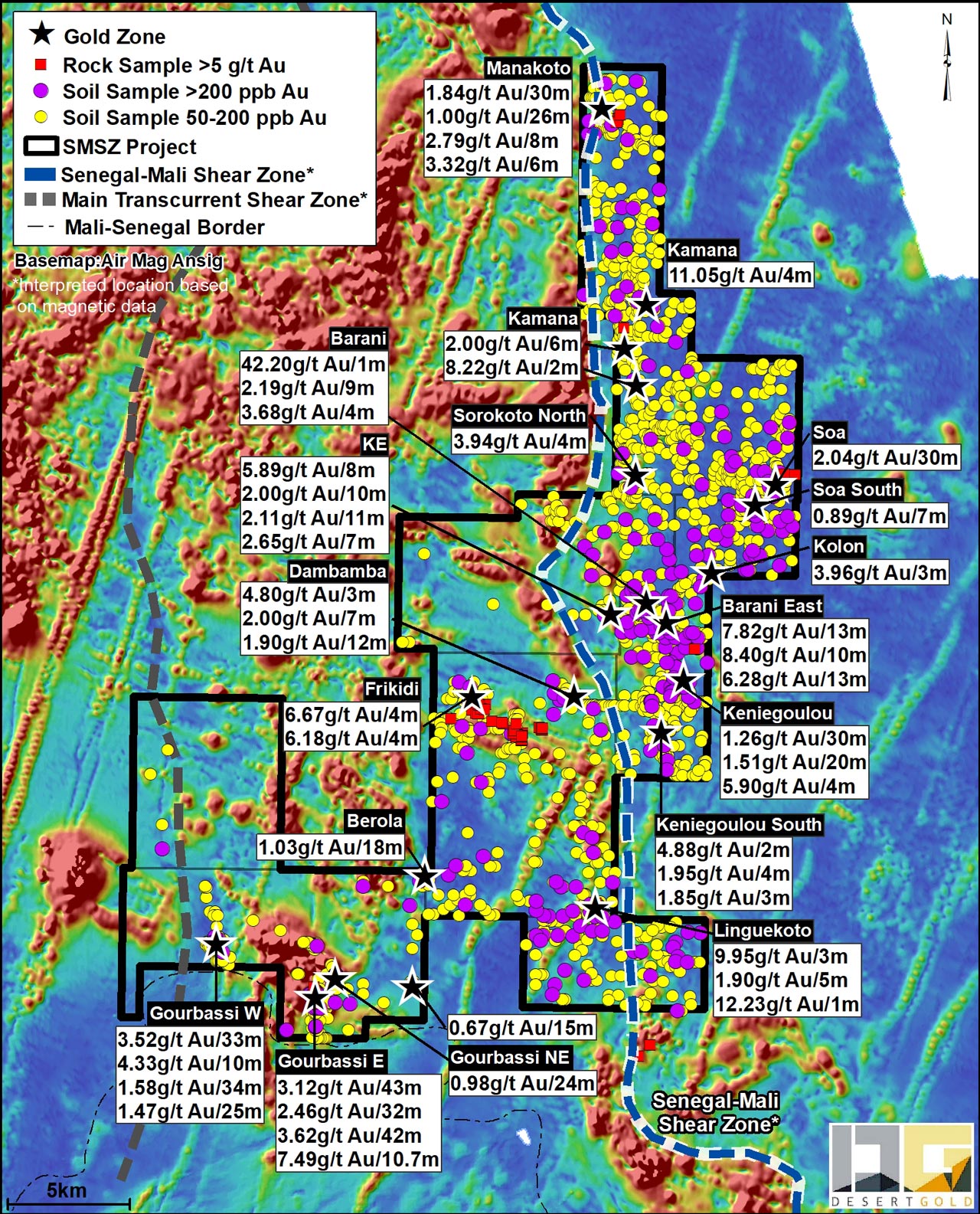 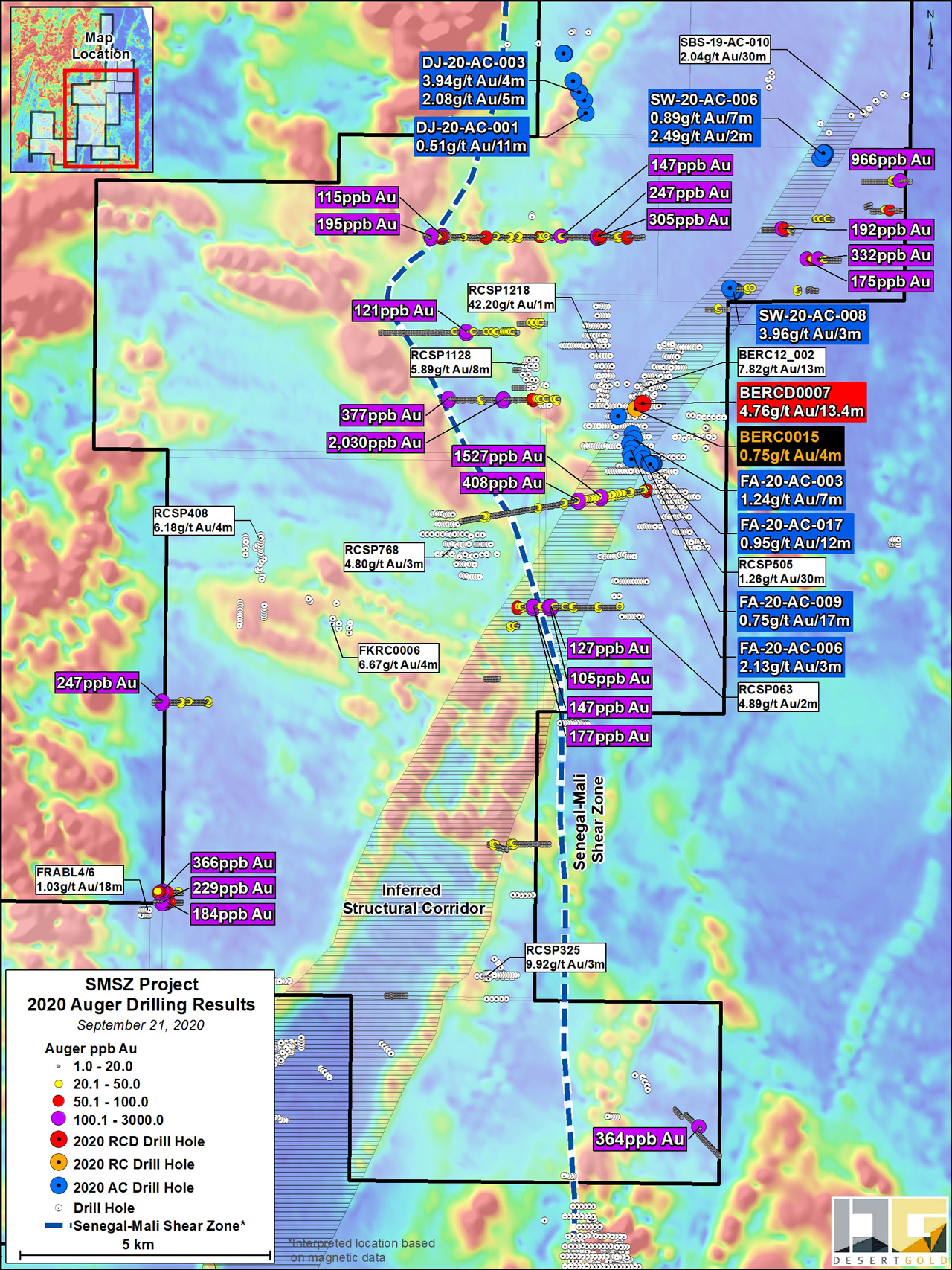 A short AC program was carried out to follow-up on the results from previous AC holes in the Barani Gap area, over a specific target at Sorokoto North and over the recently acquired Solo West Concession (see Figures 2 and 3). Significant results were returned from all three target areas. Note that AC holes can only test the near-surface, strongly weathered rocks and generally are not more than 50 metres deep.

A total of 17, Barani Gap AC holes, over six targets, were drilled to follow-up on previous AC holes that had returned good gold values as a follow-up to testing gold-in-auger anomalies. Four of the six targets areas returned significant gold results. The best hole, which lies along a 2,100-metre long gold-bearing trend, which includes the Barani East Zone, returned 0.75 g/t gold over 17 metres as a 50-metre northerly step-out of a previous hole that intersected 3.03 g/t gold over 10 metres. In-fill drilling is required along this carbonate-hosted gold-bearing trend, which has only been partially detail drilled along an 800-metre portion. The second-best hole, returned 0.94 g/t gold over 12 metres, from a parallel trend located approximately 100 metres to the east. Note that three internal samples were missing (assumed internal values of 0 g/t gold) due to likely artisanal mining depletion. This hole was drilled as a 50 metre north step out to an intercept that returned 1.36 g/t Au over 6 metres.

The third target area, Sorokoto North, is a new discovery. It is located proximal to another northeast trending cross structure, much like the Barani East-Soa Zone structural trend. Three of the six holes returned significant drill results with holes DJ-20-AC-001 and DJ-20-AC-003 returning intercepts of 0.84 g/t Au over 5 metres, 3.94 g/t Au over 4 metres and 2.08 g/t Au over 5 metres.

A total of 1,065 auger holes were drilled along 23, wide spaced drill fences over, dominantly, laterite-covered areas (see Figure 3 for general auger hole locations and highlight results). The auger holes, along the drill fences, are spaced 25 metres apart and average 9 metres deep ranging from 3 to 27 metres deep. Two samples are taken in each hole corresponding to the base of the laterite and the upper part of the saprolite (weathered rock). The purpose of the auger drilling was to test below large, laterite-covered areas, where previous work is limited to non-existent and where soil sampling is not an effective tool for the discovery of sub-cropping gold zones. The goal of this program was to identify areas with gold enrichment and then follow-up with more detailed auger drilling and subsequent testing of anomalies. This program resulted in 58 auger sites returning gold values >50 ppb gold with 25 of the sites returning >100 ppb gold, with a best result of 2,030 ppb gold. In-fill auger lines, spaced from 200 to 400 metres apart, will be completed to better define the gold-in-auger anomalies, so that drill targets can be developed. Previous auger drilling on the property, returned five significant drill intercepts with a best intercept of 3.03 g/t gold over 10 metres, from the Barani Gap area.

The five longest auger lines, up to 4.4 km long and approximately 1.3 to 2 km apart, were completed over an extensive, laterite-covered area that overlies an area to the east of the interpreted location of the Senegal Mali Shear Zone. Significant gold-in-auger anomalies, and wide areas of gold enrichment (20 to 50 ppb gold) were returned from all five lines.

Three short auger lines were completed to test laterite-covered areas to the north of the Berola gold occurrence (previous intercept of 1.03 g/t gold over 18 metres – true width unknown). The Berola occurrence is hosted by a hydrothermal breccia that is located adjacent to a manganese/hematite iron formation exhalate unit, in a similar setting to the Gourbassi NE zone, located approximately, 5.5 km to the southwest. This exhalate horizon lies proximal to a likely structure, defined by a change from higher to lower magnetic susceptibility, that separates volcanic rocks to the west, from conglomerates (in part ‘Tarkwa-looking’) and siltstones to the east. All three auger lines returned anomalous gold-in-auger results, with the two, southernmost lines returning the best results and a local high value of 366 ppb gold.

One other auger line, located in the extreme southeast corner of the property, returned a single strong gold value of 364 ppb gold. This auger line was installed to partially test an area where the Senegal Mali Shear Zone appear to bifurcate.

Work on a 43-101 technical report has commenced with the selection of a consultant and continued updating of the mineralization models. The results of this report, including an exploration plan, are expected to be released in late October or early November, with field exploration, including approximately 20,000 metres of drilling, is expected to resume in November, and then continue through to early July, 2021.

For AC drilling, all individual samples represent approximately one-meter in length of rock chips homogenized and riffle-split to an approximately 2kg sub-samples which were sent by truck from the project site, for preparation and gold assaying at the SGS laboratories in Bamako, Mali.

Each sample (auger and AC) is fire-assayed for gold by SGS laboratories in Bamako using Au-FAA505 method, which is a 50g fire assay fusion with AAS instrument finish. In addition to SGS’s own QA/QC (Quality Assurance/Quality Control) program, Desert Gold’s internal quality control and quality assurance procedures included the use of certified standards (1:20-30), sample duplicates (1 :20) and blanks (1 :20). Sample batches that fail QAQC review, especially those with significant gold values, are re-assayed with the insertion of new standards.

Desert Gold Ventures Inc. is a gold exploration and development company that holds 2 gold exploration projects in Western Mali (SMSZ and Djimbala) and its Rutare gold project in central Rwanda. The Company’s current focus is its 410 km2 SMSZ Project that spans approximately 38 km of the prolific Senegal Mali Shear Zone.