The Farabantourou exploration permit lies approximately 40 km south and 50 km north of the world-class gold mines of Sadiola and Loulo (Fig.1), respectively. These mines are situated on second order splays off the regional North-South trending Senegal-Mali Fault Zone (“SMFZ”), which the Farabantourou tenement straddles. The present geological interpretation within Farabantourou is that there is a hydrothermal alteration at a contact between two dominant lithologies, namely, sedimentary siliciclastic lithologies to the west and volcano-sedimentary units to the east; the contact is thought to form part of the SMFZ, trending NNW.

Below is the meterage apportioned to each prospect for this year’s exploration program: 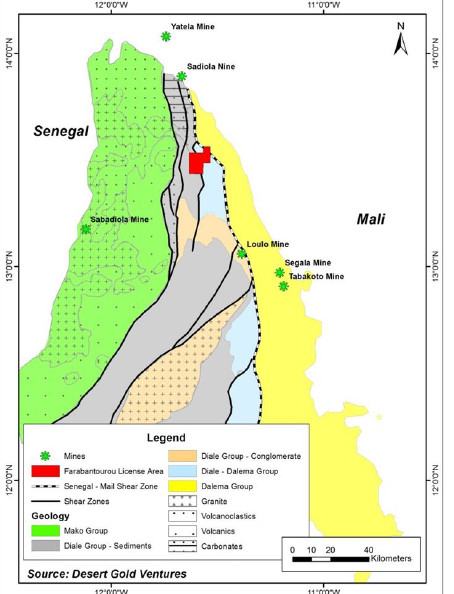 Drilling will be conducted in two phases. Approximately 2,000 meters of diamond core drilling is planned for the first phase, starting June 2017, to be completed before the start of the wet season. The second phase of drilling will comprise approximately 3000 meters using a RC rig, which will resume at the start of the dry season, early November 2017. Table 1 summarizes the approximate drilling apportioned to the three prospects. The focus of the drilling is on the three significantly mineralized zones (prospects) in the northeastern part of the property (Fig. 2), namely Barani, Barani East and Keniegoulou. 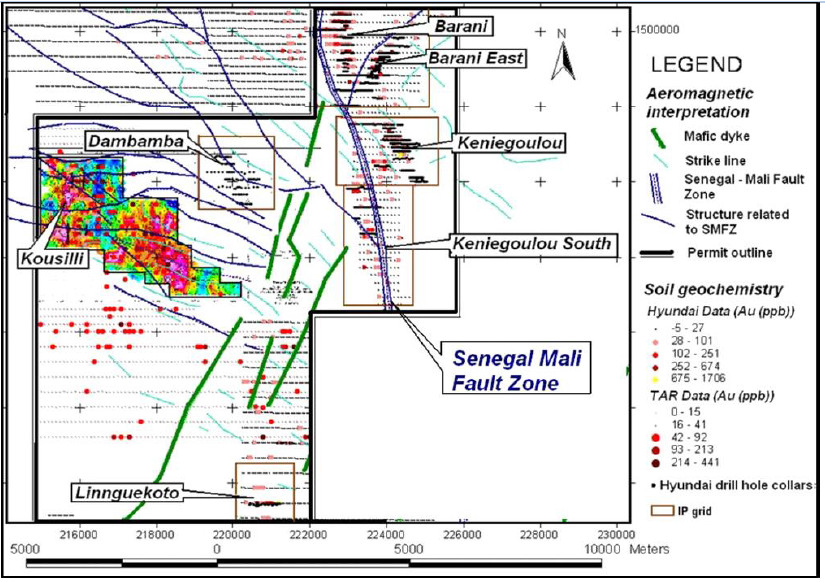 Figure 2. Past exploration summary plan including the location of the various prospects within the Farabantourou permit.

At the Barani East prospect, a resource of 69.9 koz gold (cut-off grade, 0.5 g/t Au) was estimated by Minxcon Consulting (cf. Table 2 and Fig. 3). This mineralization occurs in an eastward steeply dipping (55° to 60°), tabular body ranging in width of 4.5m to 15m with a NNE strike. The average grades vary between 2.22 to 2.29 g/t Au for the indicated and inferred categories, respectively.

Table 2. Barani East mineral resource statement made by Minxcon Consulting, November 2015. This resource statement was made in compliance with the specifications set out by the Canadian Code for reporting of resources and reserves as prescribed in the National Instrument 43-101.

At the other two prospects, Barani and Keniegoulou, significant gold intersections were made in previous RC drill programs (cf. Figs 4 & 5). The company will use the diamond drill rig at both prospects to twin some of the previous RC drill holes in addition to exploratory core drilling to better evaluate the geology and the controls to the mineralized zones intersected. Twin holes will be drilled to a greater depth than the originals given our hypothesis that gold mineralization continues at depth. 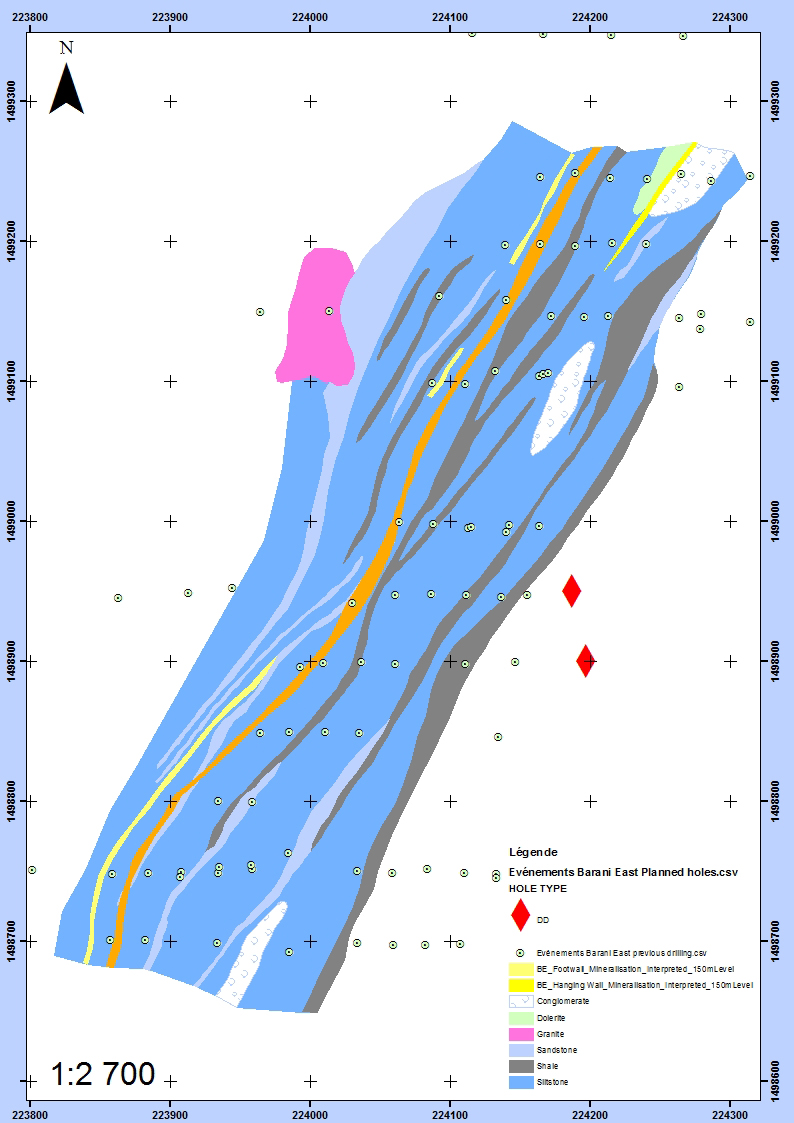 The Barani prospect shows a North-South mineralized envelope, approximately 1600 meters in strike length, delineated from RC drill intersects. The mineralized zone appears to be a sub-vertical tabular body with pinch and swell characteristics, varying in thickness between 7m and 5m, on average 6m. The initial drill program will focus on evaluating the geology, particularly recognizing the controls to the mineralization. The follow up infill RC drilling will be used to improve data density towards the estimation of resources planned for Q1 2018. The planned DD holes are marked by red diamonds below. 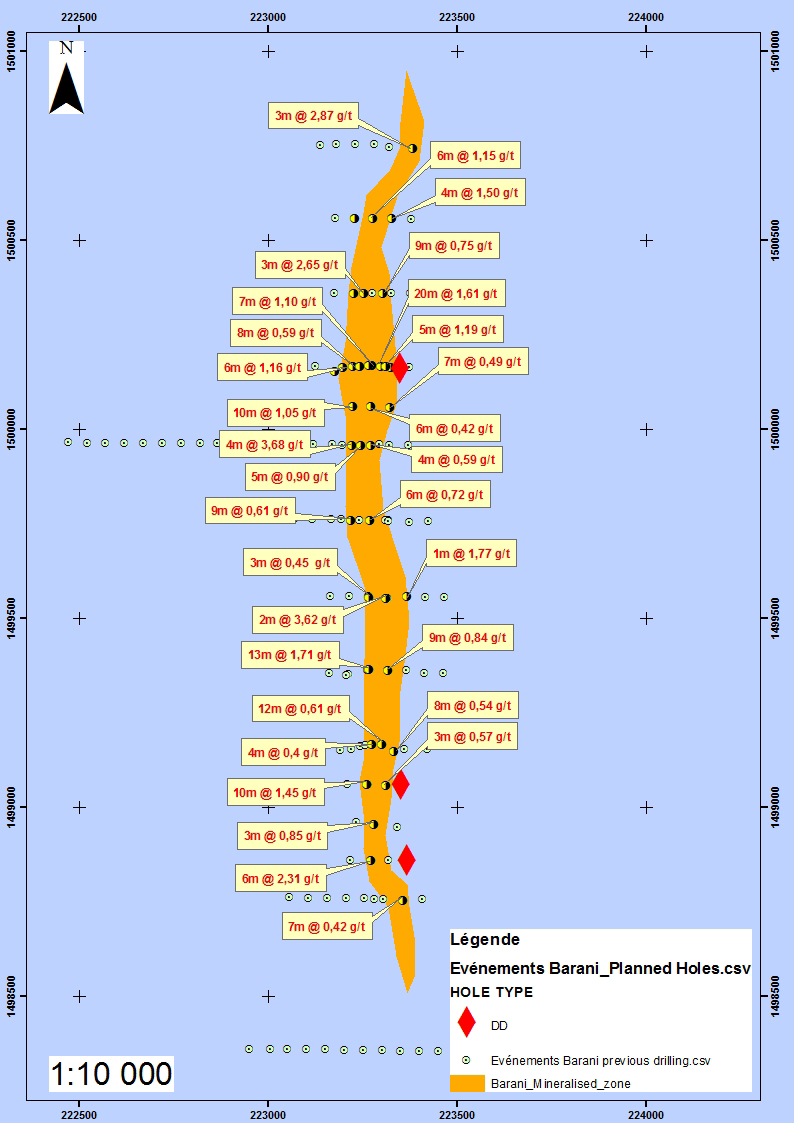 Figure 4. Locality plan of the Barani prospect showing past RC drill positions, the envelope of mineralization and the future diamond drill program excluding the holes to be twinned.

At Keniegoulou (Fig. 5) the mineralization delineated from the past RC drill intersects show two sub-parallel zones at 400 meters and 350 meters in strike lengths, oriented in a NNW direction. The Keniegoulou mineralization is seemingly in sub-vertical tabular bodies, varying in thickness from 10m to 5m, on average 5m. Core drilling will focus on providing further insight on the geology and the controls to the mineralization. The follow up RC drilling will contribute to an improvement in data density, needed to estimate the resources, planned for Q1 2018. 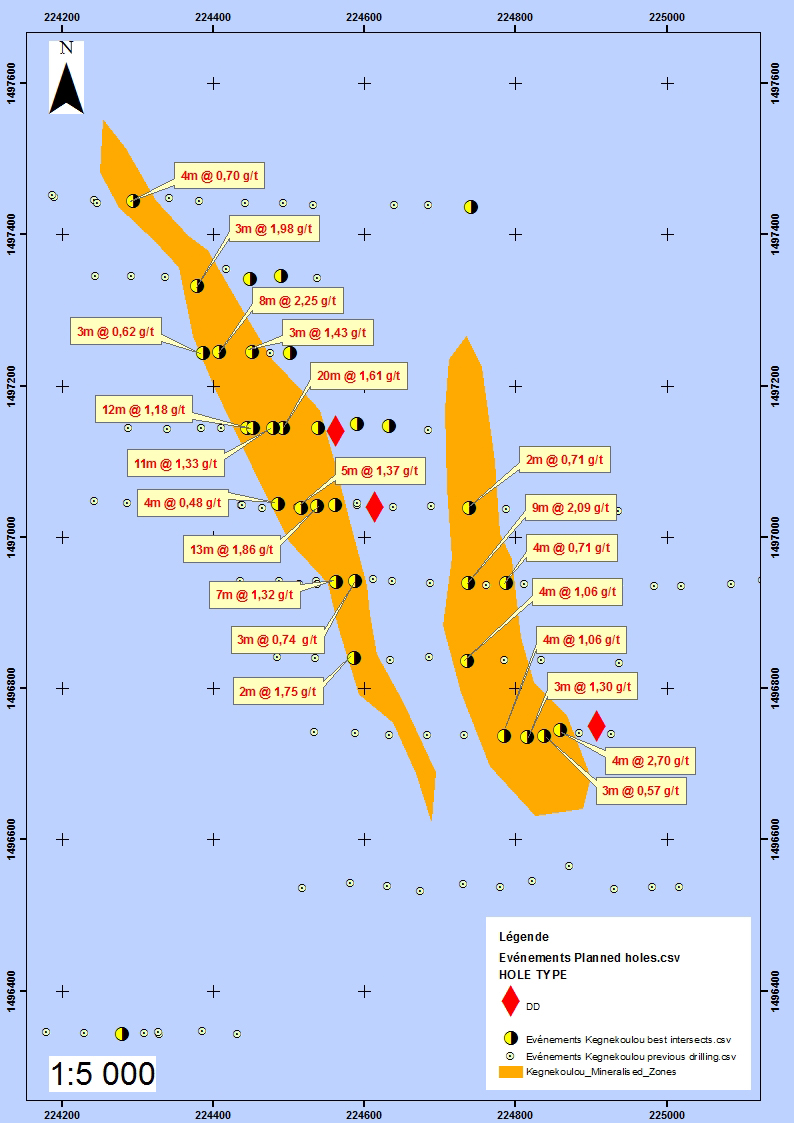 Figure 5. Locality plan of the Keniegoulou prospect showing the envelope of mineralization from past RC drill intersects and the planned diamond drill program, excluding the holes to be twinned.

Desert Gold’s President Jared Scharf commented, “We are very excited to begin this program. Farabantourou is a great prospect hosting several mineralized areas that we are undertaking to expand and get a better understanding of structurally speaking. The three mineralized zones being explored this year are orogenic, and considering their relative proximity we believe it is worth testing the thesis that they are part of a larger continuous system. We've just scratched the surface here. The deepest intersect is only at 120m at Barani East for example. Structural measurements are key to gaining a better understanding of these ore bodies. The most effective way of doing this is through diamond core drilling. The commencement and completion of this program are major steps forward towards our ultimate goal of profitable commercial mining.”

This note was reviewed by Dr. Luc Antoine who is a director of the Company and is registered as a Member of the Geological Society of South Africa (MGSSA 967397). He has the necessary experience relevant to the style of mineralization and types of deposits under consideration and to the activity that he is undertaking to qualify as a Qualified Person as defined in the National Instrument 43-101.

For further information please visit www.SEDAR.com under the company’s profile.

This news release contains forward-looking statements respecting the Company's ability to successfully complete the Offering. These forwardlooking statements entail various risks and uncertainties that could cause actual results to differ materially from those reflected in these forwardlooking statements. Such statements are based on current expectations, are subject to a number of uncertainties and risks, and actual results may differ materially from those contained in such statements, including the inability of the Company to successfully complete the Offering. These uncertainties and risks include, but are not limited to, the strength of the capital markets, the price of gold; operational, funding, and liquidity risks; the degree to which mineral resource estimates are reflective of actual mineral resources; and the degree to which factors which would make a mineral deposit commercially viable are present; the risks and hazards associated with mining operations. Risks and uncertainties about the Company's business are more fully discussed in the company's disclosure materials filed with the securities regulatory authorities in Canada and available at www.sedar.com and readers are urged to read these materials. The Company assumes no obligation to update any forwardlooking statement or to update the reasons why actual results could differ from such statements unless required by law.

Neither the TSX Venture Exchange nor its regulation services provider (as that term is defined in the policies of the TSX Venture Exchange) accepts responsibility for the adequacy or accuracy of this release. This news release does not constitute an offer to sell or a solicitation of an offer to buy the securities described herein in the United States. The securities described herein have not been and will not be registered under the united states securities act of 1933, as amended, and may not be offered or sold in the united states or to the account or benefit of a U.S. person absent an exemption from the registration requirements of such act.