Delta, British Columbia, July 30, 2018. Desert Gold Ventures Inc. (“Desert Gold” or “the Company”) (TSX.V: DAU, FF: QXR2, OTC: DAUGF) is pleased to announce that it has concluded its previously announced drill program at its Farabantourou Permit in western Mali. This program is a first step of a larger regional-scale gold exploration strategy that is focused along and proximal to the Mali-Senegal Fault Zone (“MSFZ”), which is related to more than 7 gold deposits1 that are being, or have been, mined.

This program successfully extended, confirmed and increased our understanding of the gold mineralization at all three target areas with highlights as follows:

(estimated true widths range from 80 to 95% of drilled width)

Desert Gold’s holds three gold projects (Farabantourou, Segala Ouest and Djimbala) of which Farabantourou and Segala West are located within the Kenieba Inlier of western Mali. The Farabantourou project lies within 40 km to the south of AngloGold Ashanti/Iamgold Sadiola gold mine and 50 km to the north of RandGold Loulo-Gounkoto complex gold mines (see Figure 1).

The Farabantourou exploration program consisted of 30 RC and 1 core hole, together totaling 4,059 metres, property-scale prospecting and geological mapping. Desert Gold targeted three known zones that are related to shear and fracture zones within a folded sequence of mixed limestones, siltstones and shales with stronger gold mineralization related to sulphide replacement zones in altered limestones. This mineralization style mimics that of the nearby sulphide-replacement altered, limestone-hosted Sadiola and Yatela deposits that are host to more than 8 million ounces of gold(1). 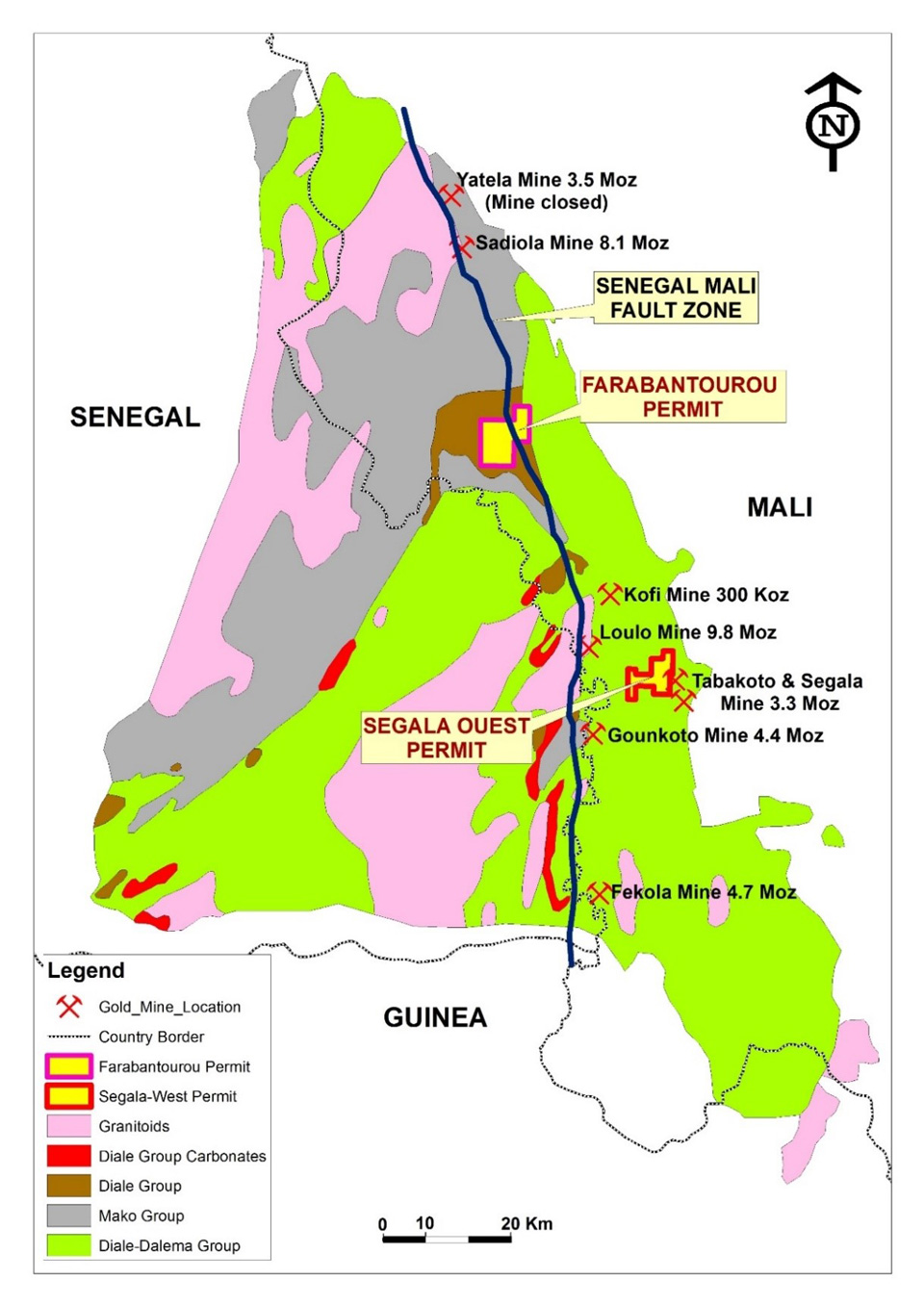 The Barani East Zone has returned the best gold grades to date with intercepts to 7.8 g/t gold over 10 metres. The zone consists of at least four, moderate- to steep-east-dipping lenses ranging in width from 4.5 metres to 15 metres along a strike length of approximately 550 metres. As well, there is good potential for parallel zones with intercepts of 2.22 g/t gold over 20 metres that will be followed up. The recent program returned a best intercept of 6.28 g/t gold over 13 metres (see Figure 2). This intercept, along with other drill data supports an open-ended, moderate-southwest-plunging zone that has a 200 metre strike. The recent drilling also suggests that the strike extent of this central, higher-grade portion of the deposit, may be increasing at depth. Additional holes will be planned to test this concept. Several other, potential, southwest plunging sub-zones, which are evident on the long section, will also need to be tested for their down plunge extents. Additional exploration is also planned to test this northeast trending zone, along strike, especially to the southwest where there is substantial laterite cover and an area where the northly-striking Barani and Keniegoulou mineralized structures would intersect the Barani East trend. This intersection area is a high priority exploration target. Due to the extensive laterite cover over the inferred structural intersection target area, an auger program is planned to support drill planning.

The Barani zone has returned drill intercepts of up to 2.19 g/t gold over 9 metres across a 450-metre wide fracture and fault zone that lies semi-parallel to the MSFZ. This zone, which has been traced for approximately 1,900 meters and is open along strike and to depth, comprises 8 modelled lenses of gold mineralization. The recent drill program of 12 RC holes was designed as widespread follow-up along this mineralized trend. The best hole from the program returned 0.85 g/t gold over 14 metres.

The Keniegoulou Zone has returned intercepts of 5.92 g/t gold over 4 metres. This zone lies south of the Barani Zone and may represent the southern strike extension of the Barani mineralized trend. There is an approximate 1.2 km exploration gap between the zones, in an area where the Barani East trend is interpreted to intersect. The Keniegoulou Zone which has been traced for approximately 1,500 meters and is open along strike and to depth, comprises 5 modelled lenses of gold mineralization. 7 recently completed holes along the Keniegoulou trend returned a best intercept of 1.63 g/t gold over 3 metres. Historic drilling returned stronger results closer to surface, which suggests that there may be near-surface gold enrichment or that the better mineralized zones are near-surface, shallow plunging zones. More geological interpretation work is planned along the Barani and Keniegoulou zones prior to additional drilling.

Desert Gold’s President Mr. Jared Scharf commented, “We’re very encouraged by the results at Farabantourou. From a relatively small drill program, we have confirmed the presence of gold mineralization along two zones, Barani and Keniegoulou, and have improved our structural understanding of the existing deposit at Barani East. It’s clear that additional work is needed to improve upon and expand these mineralized zones. This is to say nothing of the regional potential that has been identified in this area through detailed mapping and sampling on a larger scale. Desert Gold will continue its multifaceted strategy of developing its existing resource base while continuing its ongoing evaluation of other opportunities in the region. To this end we hope to provide the market and our shareholders with further guidance in the near future.” 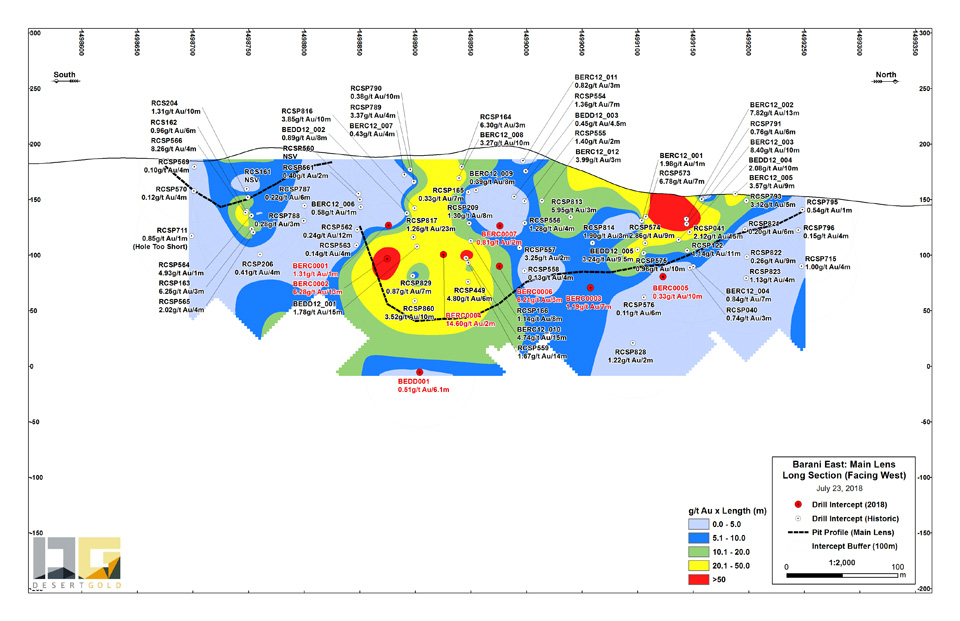 This note was reviewed by Dr. Luc Antoine who is a director of the Company and is registered as a Member of the Geological Society of South Africa (MGSSA 967397). He approves the scientific and technical disclosure in the news release and has the necessary experience relevant to the style of mineralization and types of deposits under consideration and to the activity as a Qualified Person as defined in the National Instrument 43-101.

Additional information can also be viewed at www.SEDAR.com under the company’s profile.

This news release contains forward-looking statements respecting the Company's ability to successfully complete the Offering. These forward-looking statements entail various risks and uncertainties that could cause actual results to differ materially from those reflected in these forward-looking statements. Such statements are based on current expectations, are subject to a number of uncertainties and risks, and actual results may differ materially from those contained in such statements, including the inability of the Company to successfully complete the Offering. These uncertainties and risks include, but are not limited to, the strength of the capital markets, the price of gold; operational, funding, and liquidity risks; the degree to which mineral resource estimates are reflective of actual mineral resources; and the degree to which factors which would make a mineral deposit commercially viable are present; the risks and hazards associated with mining operations. Risks and uncertainties about the Company's business are more fully discussed in the company's disclosure materials filed with the securities regulatory authorities in Canada and available at www.sedar.com and readers are urged to read these materials. The Company assumes no obligation to update any forward-looking statement or to update the reasons why actual results could differ from such statements unless required by law.

Neither the TSX Venture Exchange nor its regulation services provider (as that term is defined in the policies of the TSX Venture Exchange) accepts responsibility for the adequacy or accuracy of this release. This news release does not constitute an offer to sell or a solicitation of an offer to buy the securities described herein in the United States. The securities described herein have not been and will not be registered under the united states securities act of 1933, as amended, and may not be offered or sold in the united states or to the account or benefit of a U.S. person absent an exemption from the registration requirements of such act.